What if the Government is Just Another Firm? (Part 1)

I have a confession. I’m a political economist by trade, but I spend most of my time reading outside my discipline. I read about physics, cosmology, biology … the list goes on. Basically, if it’s not political economy, I read it.

Usually this reading doesn’t relate to my own research. I do it because I love science. But every so often lightning strikes and I discover a scientific idea that begs to be applied to political economy. This post is about one of those ideas.

Let me frame the problem.

Here’s how Darwin fixed the problem. Rather than emphasize differences, Darwin emphasized the shared features of different organisms. Suddenly the pieces fit together. Yes, organisms are different, but their shared features point to something astonishing. All life on Earth, it seems, shares a common evolutionary heritage. By mapping the similarities between species, we can reconstruct the evolutionary tree of life.

What’s the biomass spectrum? It’s a relation between the size of an organism and its abundance. It’s based on a trend that you know intuitively. Small organisms (like mice) are abundant. Large organisms (like elephants) are rare. The astonishing thing, though, is that this trend extends across the entire spectrum of life. From bacteria to blue whales, the abundance of an organism is predictable from its size alone.

While studying the biomass spectrum, I was reminded of business firms. Similar to organisms, the abundance of firms declines with size. Small firms are abundant. Large firms are rare. I’ve studied this phenomenon for years. But until recently, I’d never asked an important question: where do governments fit into the picture?

Whales are the largest living animals. As such, they’re exquisitely different from other animals. Yet when it comes to predicting whales’ abundance, these differences are irrelevant. Whales are ‘just another organism’. Their abundance is predictable from size alone.

This idea sounds crazy. But in this two-part post, I’m going to show you that it’s consistent with the evidence.

For the moment, let’s leave behind the myopia of our human world. Let’s gaze at life in all its splendour. Life comes in all shapes and sizes. But have you ever thought about the scale of this variation? It’s stupendous.

In terms of mass, a single-celled prokaryote (the smallest organism) is about 20 orders of magnitude smaller than a blue whale (the largest animal). Let’s put this in perspective. If the prokaryote was a 1 ton boulder, the blue whale would weigh as much as the Earth.

Amidst this stupendous variation, it almost defies imagination that there could be underlying order. And yet there is. To predict an organism’s abundance, we don’t need to know its species, its diet, or its habitat. No, to predict abundance, we need only know the organism’s mass. Biologists call this pattern the biomass spectrum.

Enter Ian Hatton and colleagues. In a recent paper, Hatton and his collaborators studied the biomass spectrum across all organisms. What they found is astonishing. From the smallest prokaryote to the largest mammal, organism abundance declines predictably with size. Figure 1 shows the trend.

There are two things that are interesting about the biomass spectrum. First, there is a single trend between mass and abundance that runs though all life on Earth. (Well, almost all life. I’ve excluded plants here, because they lie somewhat off the trend.) Second, different types of organisms have distinct locations on the trend. Prokaryotes are small and ubiquitous. Invertebrates are medium sized and common. Mammals are large and rare.

Looking at this biomass trend, it struck me that something similar might be true of human institutions. Independent restaurants, for instance, are small and ubiquitous. But mining firms are large and rare. If we keep going up the size spectrum, I propose that we’ll get to an entirely different institution: government. Governments are the whales of the institution world. They’re exquisitely different from other institutions. But like the abundance of whales, I propose that the abundance of government is predictable from size alone.

A model of government abundance

With the biomass spectrum in mind, I’m going to propose a simple model of government abundance. I call it the ‘government-as-firm’ model. Here’s how it works.

In this government-as-firm model, the vast majority of institutions are firms. But above some size threshold, firms turn into ‘governments’. Here’s a conceptual diagram:

In Figure 2, I’ve labelled a few institutions to help make things concrete. At the small end of the size spectrum are self-employer firms like your favorite street-food vendor. These firms are tiny and ubiquitous.

As we move up the size ladder, we get to medium-sized firms like Questcore and Revlon. These firms have hundreds (or thousands) of employees and are fairly common.

Continuing up the size ladder, we get to large firms like Microsoft and Amazon. These firms have tens of thousands (sometimes hundreds of thousands) of employees and are quite rare.

Finally, we get to the largest institutions — governments. These beasts can have millions of employees. But they’re vanishingly rare. In the US, for instance, there are about 15 million firms [3]. But there are only about 90,000 governments. Most of these are local governments. Moving up the size ladder, the US has 50 state governments. And there’s only one federal government.

To summarize, I’m proposing that we can use the size distribution of firms to predict the abundance of government. In other words, when it comes to size, government is ‘just another firm’.

Yes, this model is a simplification

This is obviously a simplification.

Still, assuming such a line exists is probably a reasonable approximation.

I’m guessing that the same is true for governments. I know that there’s no sharp line that divides firms from governments. But I hope that assuming such a line exists is a reasonable approximation. [2]

Now that we’ve discussed the details of the government-as-firm model, let’s get to the predictions. If government is ‘just another firm’, there’s an obvious consequence: when firms grow, government should grow too.

Figure 3 illustrates this prediction. Here I visualize the government-as-firm model as a landscape. Each black pyramid is a firm. Each red pyramid is a government. (I’ve assumed here that government consists of the 50 largest firms.) 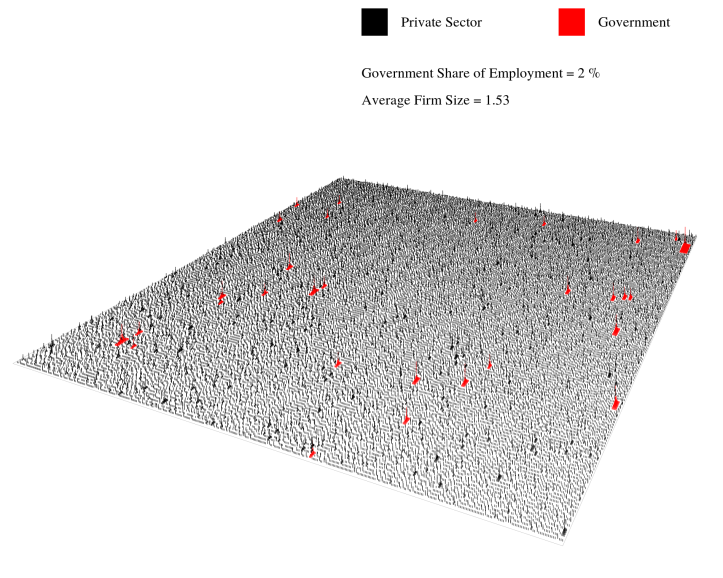 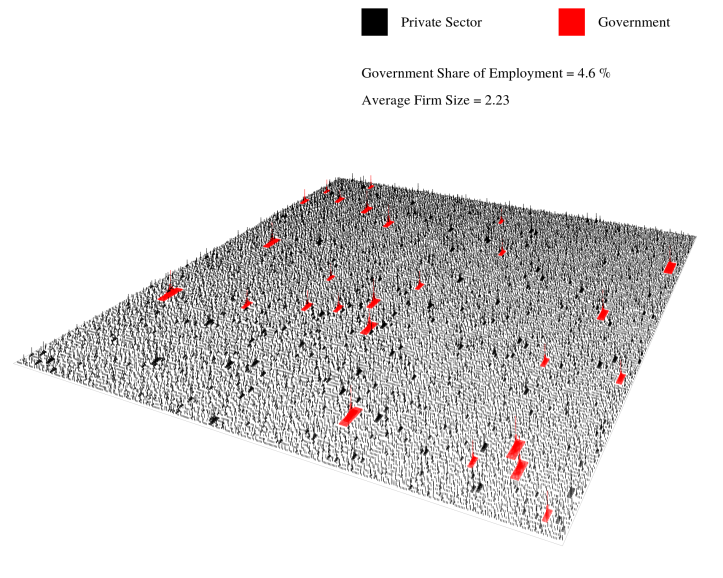 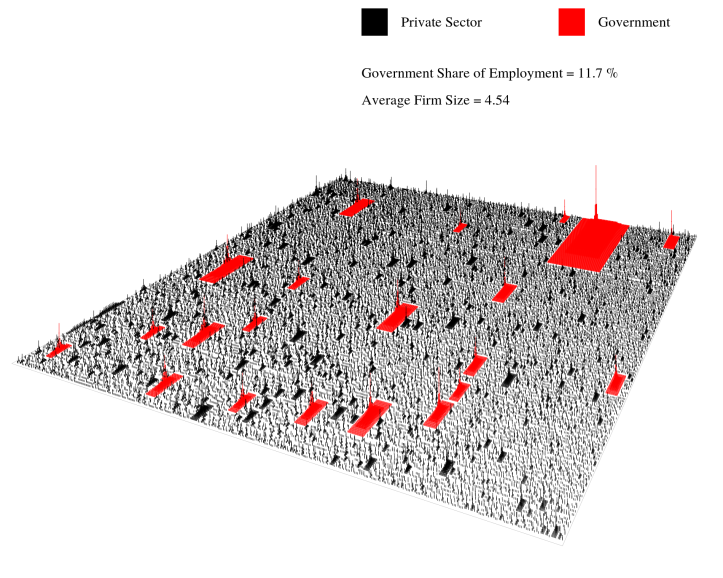 From top to bottom, each panel in Figure 3 shows progressively growing firms. (For the math people, the firm size distribution follows a power law. To simulate the growth of firms, I lower the power-law exponent.) In the corner of each panel, I show the government share of employment and the average firm size. Looking at all four panels, we can see that as firms grow, the government share of employment grows as well.

So the government-as-firm model makes a clear prediction. As firms grow, government should grow too. The question is — does this actually happen in the real world?

The answer appears to be yes. As Figure 4 shows, countries with larger firms tend to have larger governments.

This is an exciting result for two reasons. First, it’s not expected by mainstream economics. Nothing in mainstream theory suggests that government size should be connected to firm size.

Second, this result is exciting because it matches what our government-as-firm model predicts. Figure 5 compares the growth of government and firms in the real world (black points) to the trend predicted by the model (rainbow). Only three countries are outside the model’s range (Qatar and United Arab Emirates on the right, Malawi on the left).

Looking at the model’s results, you can see that two things affect government size:

How should we interpret the number of ‘firms’ in government? I treat this parameter as an outcome of political preference.

The demographer and the biologist

Although I’m a political economist, I often tire of the myopia of the field. It’s not that this myopia is bad. It’s okay to get engrossed in the grit of human politics. But sometimes this prevents you from seeing the big picture.

Most political economists are like population demographers. Demographers delve into the details of population density, trying to understand the subtle differences between societies. In the same vein, political economists dissect the minutia of human politics. This fine-grain study is admirable. It’s a key part of science. But it’s not the only part. Sometimes science requires a wide lens.

Unlike the demographer, the biologist isn’t concerned with the details of human population density. Instead, the biologists steps back and looks at all life on Earth. By doing so, the biologist realizes that human abundance fits into a larger trend. Like all other organisms, human abundance is predictable from our size. Yes, industrial humans are more abundant than our hunter-gatherer brethren. But in the grand scheme of life, this difference is a fudge factor. If you want to predict human abundance, you don’t need demography. You need a bathroom scale.

In this post, I’ve played the biologist. I’ve argued that when it comes to understanding government size, political economists are missing the big picture. They’ve focused mostly on politics — and for good reason. Political debates about the proper role (and hence size) of government dominate our lives. But by focusing on this debate, political economists have missed the larger trend, which is this: when it comes to abundance, government behaves like it’s just another firm.

Economics from the Top Down is where I share my ideas for how to create a better economics. If you liked this post, please consider becoming a patron. You’ll help me continue my research, and continue to share it with readers like you.

Sign up to get email updates from this blog.

This work is licensed under a Creative Commons Attribution 4.0 License. You can use/share it anyway you want, provided you attribute it to me (Blair Fix) and link to Economics from the Top Down.

[1] Sources and methods for human abundance. Humans have an average mass of 62 kg. In Figure 1, I’ve plotted three population densities: (1) the density of the density city; (2) the average density of modern humans; (3) human density during prehistory.

[2] We won’t know if a size threshold for government is a good approximation until we measure the size distribution of government. This is something I intend to do in the future. On that note, if you know where I can get data on the size (number of employees) of local US governments, leave a comment.

[3] According to the US Census Business Dynamics Statistics, there are about 5 million firms in the US. But this doesn’t include people who are self-employed but unincorporated. There’s about 10 million of these people. Including them brings the total number of firms to roughly 15 million.